The Total Gamma Rad in-country is going UP.

Dana Durnford is back from a 4 month Nuclear Fallout Marine Sailing Expedition Species Count and is in shock that the only star fish left are all disfigured by tumors to the point where STARFISH do not look like Starfish anymore Oh and btw all other species were missing from the tidal zones ..

Your donation will help us sustain this most resource-intensive form of journalism, ensuring that the most complex and important stories still get told. ᵀʱᵃᶯᵏ ᶣᵒᵘ

paypal https://www.paypal.me/danadurnford
or use credit card at the site: http://www.thenuclearproctologist.org/

YTD is short for Year to Date. It means January 1 of the current year to today. CPM is short for Counts Per Minute.

Source RadNet Gamma radiation readings are taken hourly throughout the year. Radiation covers the US like a deadly blanket. 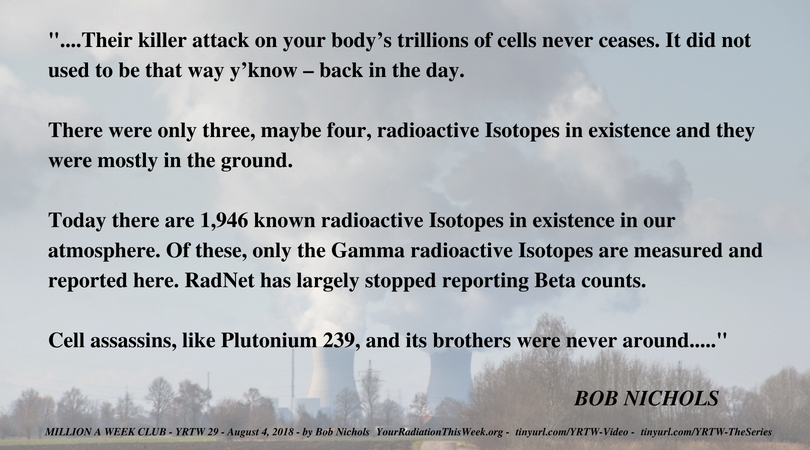 Are you in a city that gets a Million Counts of Radiation a Week? First, how on earth are you going to find out? That is a secret, isn’t it? Radiation?

The nearby Targeted Population of US nuclear power plants is 160,876,377 people by the official 2010 US Census with a measured:

This is an increase in only a week that is way too high a price to pay.

Note: It is not really 11 years, just 9 years; Colorado Springs data was WITHHELD for 2006 and 2007, and continues to be WITHHELD by the PTB [Powers that Be].

I wonder what really happened around Colorado Springs in 2006 and 2007, don’t you?

Once emitted from the nuclear power plant, the Rad travels with the wind.

Much of it goes around the world and is detected on the West Coast of the United States.

Nuke Power Plants add to the deadly radiation every minute of every day. There are 525,600 minutes in 2018.

“This is a Bad situation for all who breathe,” states EU physicist Dr. Paolo Scampa.[5] Now included, for the 29th Week of 2018 just passed, all cities above 29 Million CPM [27] Year to Date [YTD] of deadly Gamma Radiation.

Gamma “Rays” unpublished radioactive kin are a disastrous freebie from the PTB [Powers that Be.] A Count is One Radioactive Decay.

NOTE TO READERS: The editorial work is solely crowdfunded via PayPal. Click here to donate>> Thank you.

Tables of Poisoned American Cities
Million a Week and Total Gamma Radiation Reported in the USA – Week 29
January 1 to July 28, 2018
Published August 4, 2018
Gamma and Beta CPM by City and State in the US

I won’t try to kid you with good news lies and made up “fake facts.” Bottom-line, this is way too much radiation for humans to take.

I despise the people-like animals responsible for this world wide calamity. I will continue the report as long as I am able.